It was John Fogerty’s rough and inimitable voice, as well as the delivery of fantastic melodies that caused Creedence Clearwater Revival to instantly become the prominent American single band from the late 60’s and early 70’s. The by CCR on single recorded versions of Dale Hawking’s “Suzy Q” and ‘Screaming’ Jay Hawking’s “I put a Spell on You” were the first big hits of CCR. When their second album “Bayou Country” was released CCR became suddenly the most popular rockband in America. 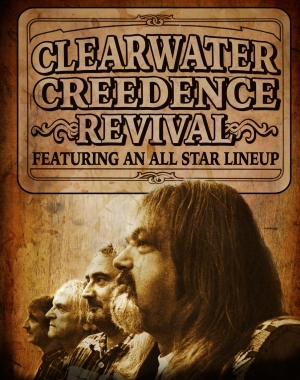 With the appearance of a single with golden hits on both sides, “Proud Mary” en “Born on the Bayou”, CCR dominated for over 2 years the radio Top 40 without causing disappointments towards the anticommercial rockpublic. CCR’s rough rocksongs often had political and cultural content, this was the reason that the quartet appeared on the Woodstock festival in 1969.
CCR had 7 big hits in 1969 and 1970: “Bad Moon Rising”, “Green River”, “Fortunate Son”, “Down on the Corner”, “Travelin Band”, “Up around the Band” and “Lookin out my Backdoor”.

CCR broke up in 1972. In 1995 two former members of CCR, Stu Cook and Doug Clifford, started a tour under the name Creedence Clearwater Revisited. Former frontman John Fogerty toured once in a while but mainly occupied himself as a studiomusician.

Then in the winter of 1998 Clearwater Creedence Revival was established. The original name was Creedence Clearwater Revived. The band was formed by Peter Barton and Geoff Hammond. In 2018 the band will celebrate its 20th anniversary, while in that same year it is exactly 50 years ago that CCR was established.

The show includes all CCR classics as Have you ever Seen the Rain, Lordi, Proud Mary, Fortunate Son, Who’ll Stop the Rain, Run Thru the Jungle, Suzi Q and many more in a fabulous one and a half hour during performance.